Other than too many people wearing Blue Jays baseball caps, there’s a lot about Adamson Barbecue in Toronto — O Canada! — that will remind a Texan of home.

— There’s the line of customers that forms well before the joint opens, even in the rain.
— The big Texas flag in the main dining room.
— The gallery of excellent Robert J. Lerma barbecue photos on the wall, including a portrait of Tootsie Tomanetz, the grand matron of smoked meat at Snow’s BBQ in Lexington.
— Watching co-owner/pitmaster Adam Skelly carefully carve each order. With a bit of imagination, it could be Aaron Franklin at his original Austin trailer.

And then there’s the barbecue. We had four people in our tasting party: Long-time Posse member Sherry Jacobson and our long-time friends from Pittsford, NY, Janice and Brian Wormington.

The brisket was perfectly cooked, melt-in-your-mouth tender. The beef rib and half-chicken, brined in pickle juice, were excellent. The spare ribs and homemade sausage were fine.

The only lagger was the turkey breast. “I didn’t like the turkey,” Janice said. “It needed to be cooked longer.”

She did just that the next morning, frying the leftover turkey with some lean bacon. It was very good.

Sherry, who has eaten at many of the top spots in Texas, thought that, overall, Adamson would comfortably rank among the Top 50 joints in the Lone Star State, but not the Top Ten.

I agree. My main criticism, other than a couple of the meats needing more time on the pits, was the seasoning. The rubs on everything but the beef rib seemed too tame and could have used more oomph.

The Adamson Barbecue story will sound familiar to anyone who has followed the smoked meat revolution in Texas. Adamson began in 2013 when Skelly and co-owner Alison Hunt started a food truck and catering company. In 2016, after doing some on-the-ground research in Texas, they opened their permanent joint in an industrial area several miles from downtown Toronto.

“We’re not doing anything crazy,” said Matt Pelechaty, who helps run the pits. “We’re just trying to do justice to the barbecue standards in Texas.”

Pelechaty gave me a tour of the operation. The workhorse smoker is an old Oyler 1300, supplemented by a couple offset pits. The joint burns mainly oak wood, with a little maple, Pelechaty said.

“In Toronto, we definitely set the bar,” he said. “But we don’t keep our bar at the Toronto level. We’re looking at the Texas level.”

The Adamson owners recently opened a pizza joint in a space adjacent to their barbecue operation. There are some barbecue flavors on the pies, but the main connection is bread making. Unlike Texas joints that serve plain white bread with their meats, Adamson makes its own bread. It is very good.

The line at 10:30am at Adamson Barbecue on a Saturday, 30 minutes before opening. (Photo ©Sherry Jacobson/Texas BBQ Posse) 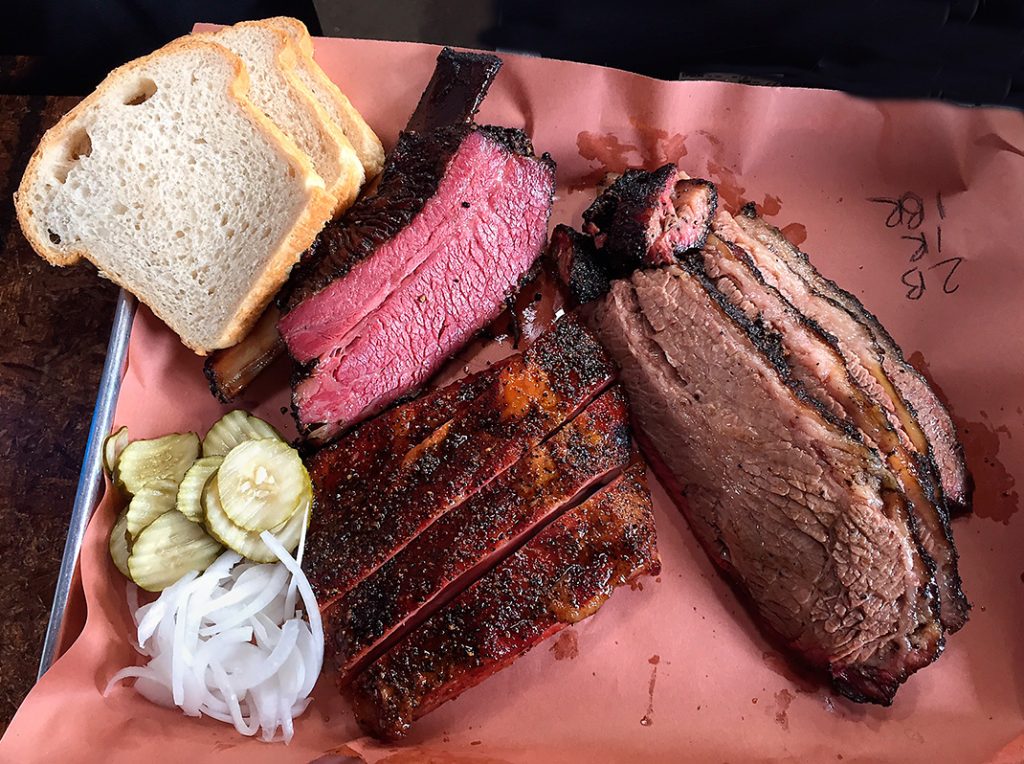